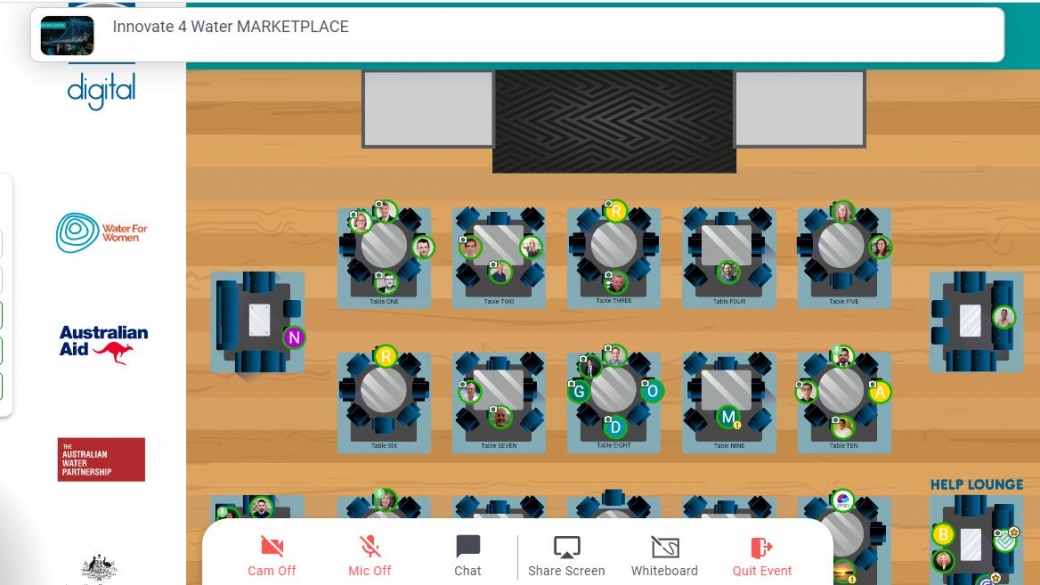 Our CEO and co-founder, Amanda Siqueira, has had an excellent opportunity to present at the Innovate 4 Water conference in Brisbane, organised by the International Water Centre (IWC).

The presentation was hosted on an innovative conferencing platform that combined both physical and virtual participation, meaning ideas sharing and networking opportunities were still flowing, despite the physical separation.

It was a great initiative and implementation to keep people innovating for water. 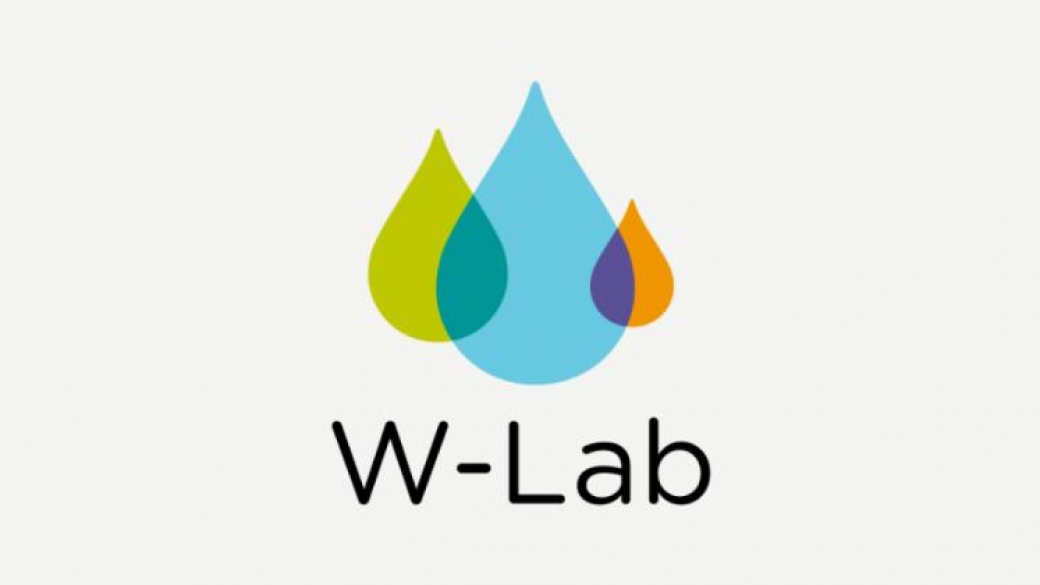 VAPAR was privileged to attend the W-lab workshop last week, which is an innovative tech program run by Water Services Association of Australia (WSAA), Isle Utilities and ThinkPlace. We were invited to provoke thought around new ways of looking at problems and overcoming challenges in implementing innovative tech. It was great to see that the Australian water industry is so focused on adopting change the right way. 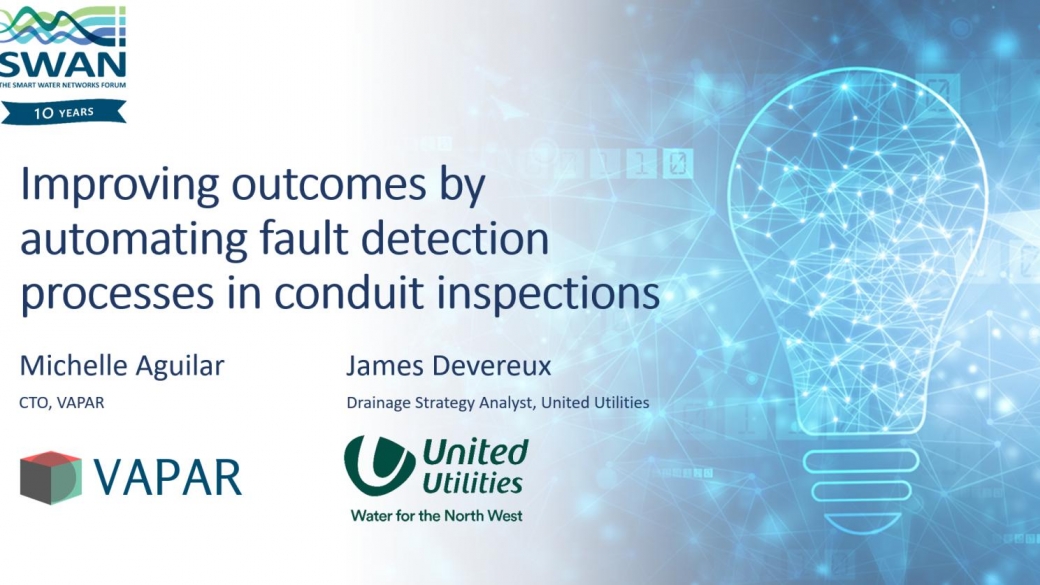 Co-founder and CTO Michelle Aguilar had an excellent opportunity to share the latest developments we are working on with United Utilities last night at the 2020 annual SWAN conference. Presenting with James Devereux in the Wastewater panel, we saw plenty of incredible developments in this space and are excited to see innovative tech being adopted around the world to deal with the challenges. It is promising to see some of the giants of the water industry are busting through barriers for adoption. The insights that have come from working with UU over the past nine months have been invaluable! 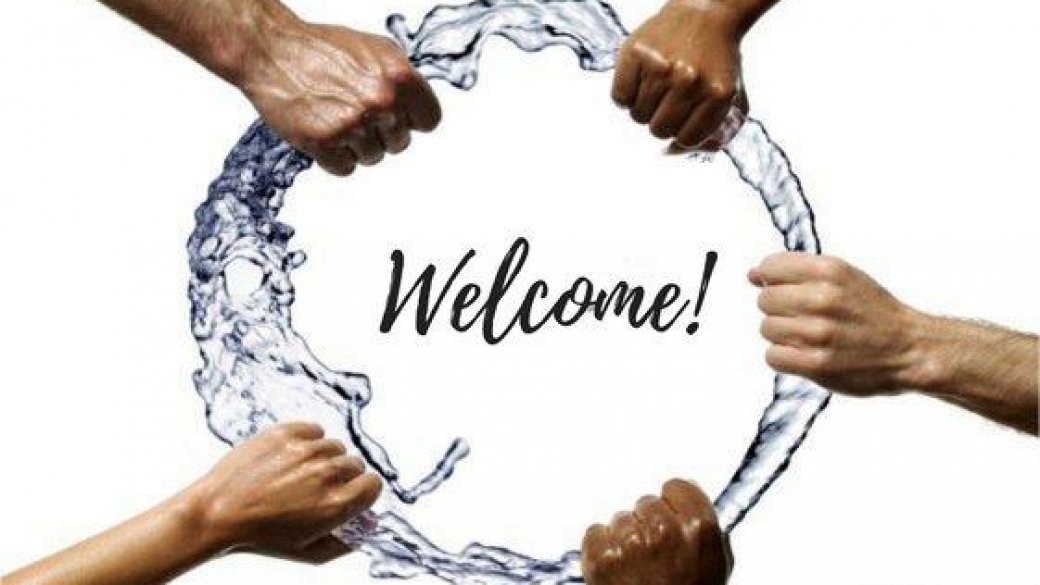 We are proud to announce that we are now officially a member for SWAN – The Smart Water Networks Forum.

SWAN is a UK-based global hub for the smart water sector. It brings together leading international water utilities, solution providers, academics, investors, regulators, and other industry experts to accelerate the awareness and adoption of “smart,” data-driven solutions in water and wastewater networks worldwide.

We are excited to be joining great water innovators. 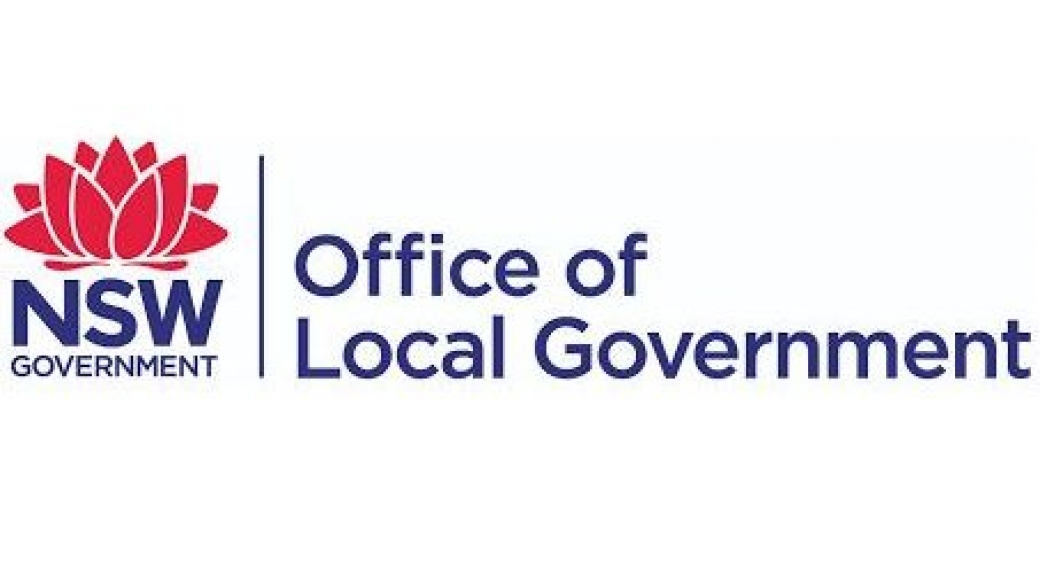 With EOFY fast approaching, we are seeing more Councils get in touch to complete their pipe condition assessments to fulfil asset valuation requirements.

There’s good news for NSW LGA’s who now have a bit more time to get their reporting done in recognition of the impact of COVID-19, as well as sharing in the $500M funding boost announced by the Commonwealth government last week.

If your organisation needs a fast, accurate and cost-effective way to meet EOFY asset valuation requirements for piped infrastructure, get in touch! 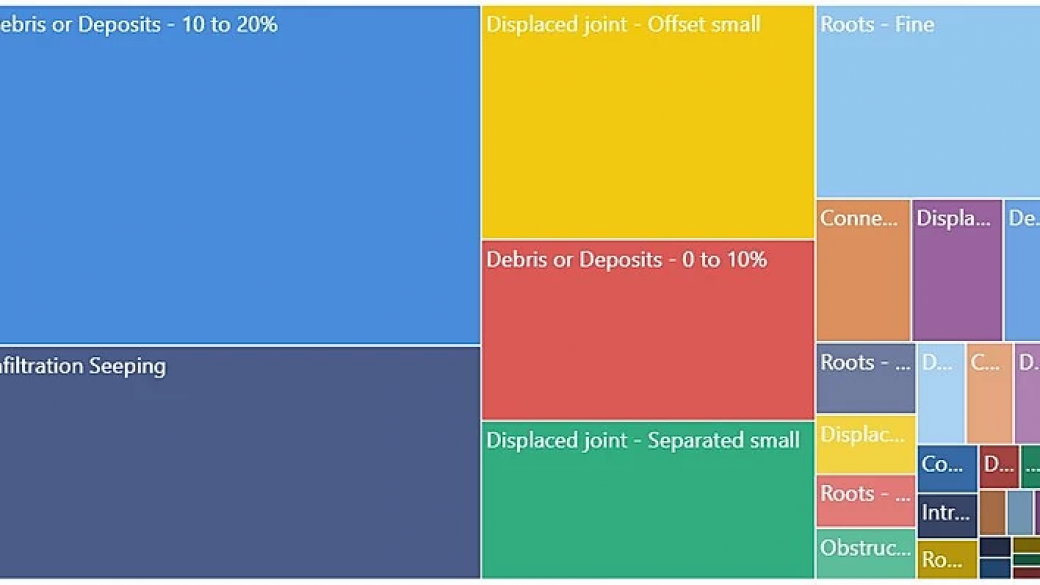 At VAPAR, we’ve been doing more and more work with a number of councils and municipalities over the last couple of months and are finding some interesting insights from the CCTV inspection data that are relevant to more than just the pipes in our clients drainage network.

Most of the stormwater CCTV inspection footage that we are processing is producing the same types of defects, and in some cases, there are things that can be done during the design and construction phase that can prevent the occurrence and frequency of common defects. After all, prevention is better than cure.

There are also a handful of ways that these common defects can be addressed if the timing of any intervention is being undertaken a long period after the pipe has been installed.

Based on 1,421 stormwater inspection CCTV videos, representing 35.53 kilometres (or approximately 22 miles) that have been analysed by VAPAR’s web platform in the last couple of months, we dug into the data to look at the most common defects that were present, based on what was identified from the inspection footage.

But first, by way of context, below is a breakdown of the factors that characterise the sample dataset:

The majority of the sample dataset was from steel reinforced concrete pipe. The next most common material type was polyvinyl chloride (PVC). Other pipe materials were excluded from the sample dataset as there were not enough of them to be representative of ‘common’ defects.

Note that this analysis is focused on Stormwater pipes only; the majority of sewer pipes processed through our system are excluded from this dataset and will be covered in another post.

When explaining the defects observed in these types of pipes to our non-engineering team members, I found this particular explainer video of ‘how concrete pipes are made’, including showing the wrapping of reo-bar and casting of concrete pipes, to be particularly helpful and engaging.

Due to the weight of the steel reinforcement in each pipe, most steel reinforced concrete pipes have a manufactured lifting hole (also referred to as a lifting eye) on the top of the pipe to aid handling and installation. However, if the wrong concrete pipe lifting device is used during handling, lifting holes can become damaged, whereby there is excessive spalling of surrounding concrete etc. Over time damaged lifting holes can cause other issues such as circumferential cracking and infiltration, which may or may not cause further deterioration to the overall pipe condition, and are therefore defects worth noting during CCTV inspections.

Surface damage showing corrosion products or exposed reinforcement was also a common defect observation. This defect is typically weighted quite severely in condition assessment standards because of the theoretical importance of concrete cover in maintaining the integral strength of the steel reinforcement. However I found this blog post to provide an interesting perspective based on in-ground results of steel reinforced concrete pipes over a 30 year life span. Check it out.

The treemap diagram of defects for polyvinyl chloride (PVC) pipe from the sample dataset shows that deformation to varying extents are the top three most common defects identified. Anecdotally, I have experienced deformation to be a commonly observed defect during inspection of PVC pipes, and I was really interested to see this bear out in the data analysis of the sample dataset.

What should I do about these structural defects?

Without a doubt, and as a chorus of literature will attest to, the bedding material, thickness and compaction can go a long way to overcome a number of the structural defects listed above that relate to the load bearing capacity of the pipe. This holds true for both rigid and flexible pipe materials. In fact, for flexible pipes in particular, I would go so far as to say that bedding and bedding compaction is the major factor to the structural performance of pipes. Using experienced drain layers and a well-planned inspection and testing plan during installation can reduce the risk of these common structural defects developing later on.

Additionally, pipes need to be designed for both design loads, as well as the construction loads that are imposed before the allowable depth of cover is achieved. This is quite a common cause of structural defects in newly laid pipes, alongside improper handling. In my opinion, the designer should ensure this is accounted for, as once the construction starts, site engineers are challenged with too many moving parts on site to constantly check weight restrictions for their heavy equipment as and when the pipes are getting laid. Accounting for live construction loading may add to the project’s capital cost (from purchasing higher strength pipes), but can save overall costs in quicker acceptance for adoption by the asset owner, and the asset owners operation and maintenance activities down the track.

Pre-adoption CCTV surveys should be a ‘hold point’ in the inspection and test plans before taking on the asset, and are an opportunity for asset owners to request that drain layer contractors remediate any defects identified before adding the asset to their network.

Minor levels of debris and deposits were the most commonly observed defects in the stormwater CCTV sample dataset. This comes as no surprise to those of us that are familiar with the operation of stormwater pipes; at times it feels as though they pass just as much leaf litter and street litter as they do surface water. Apart from the reduction in cross sectional area, small amounts of debris and deposits start to become an issue when the presence of that debris/deposit increases the risk of additional debris accumulation over time.

What should I do about these service defects?

Source control is definitely the name of the game to reduce the instances of debris and deposit build up in pipes. Gross pollutant traps, or litter traps, at key points in the network can reduce the introduction of debris into the system. Designing pipes with enough fall can also aid the pipes ‘self-cleaning’ ability. The other common defects that are joint related can be addressed during the design, construction and commissioning phase. Where possible, installed pipes should be installed with a rubber ring joint to facilitate allowable joint articulation whilst keeping the joint as watertight as possible. However, even with rubber ring joints in design drawings, if the drain layer contractor has not pushed the pipes to the witness mark, or even over-inserted, this can cause issues with the joint. A commissioning CCTV survey should pick this defect up for remediation. 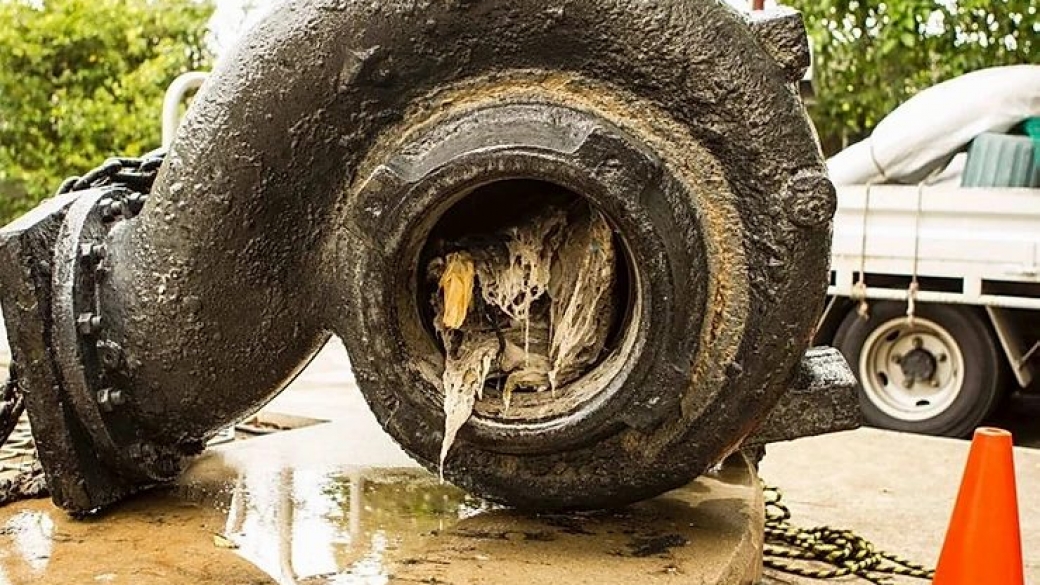 “In a normal year, it’s costing us $2 million [to clear sewer blockages] but in the last month or so, it has been a rapid increase,” – Townsville City Council.

With estimates of “$400–$500 to have a CCTV inspection carried out and the blockage cleared” there is definitely a financial incentive to heed the advice of the water utilities: “Don’t flush it. Bag it. Bin it.”

Many thanks to all the plumbers, treatment plant operators and contractors out there that continue to keeping our pipes in service during this difficult time. 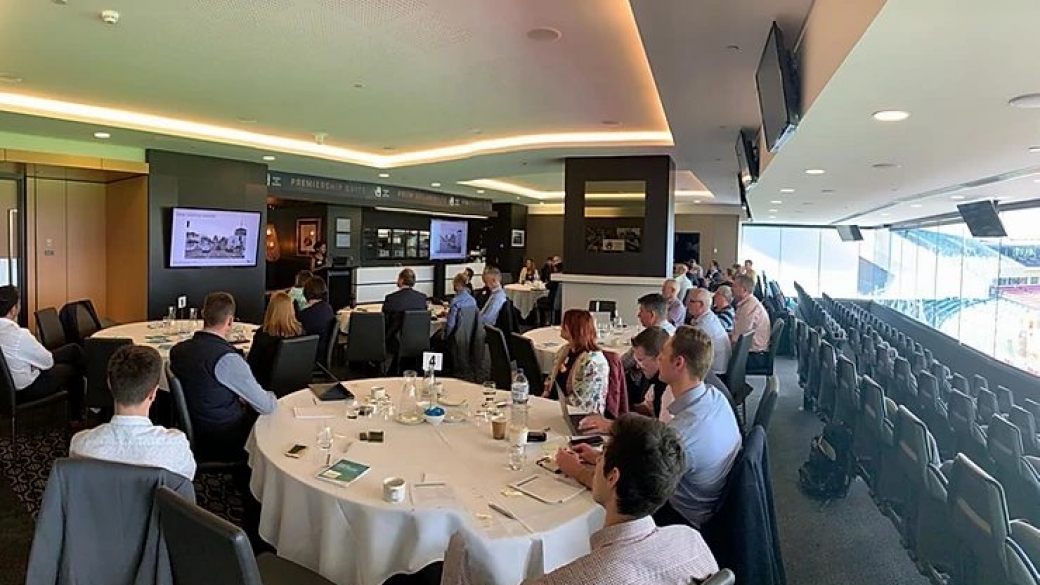 Last month, VAPAR had the privilege of presenting at the Assetic SA User Group in Adelaide to 55 attendees from 17 councils.

It was a collaborative forum where speakers and asset managers came together to discuss how applications in deep machine learning, automation and digital twins can change the face of public infrastructure management to serve our communities better.

The discussion between all of attendees involved was what made the forum truly collaborative. The best way to drive innovation adoption is to get feedback first hand, and we were privileged to be involved! 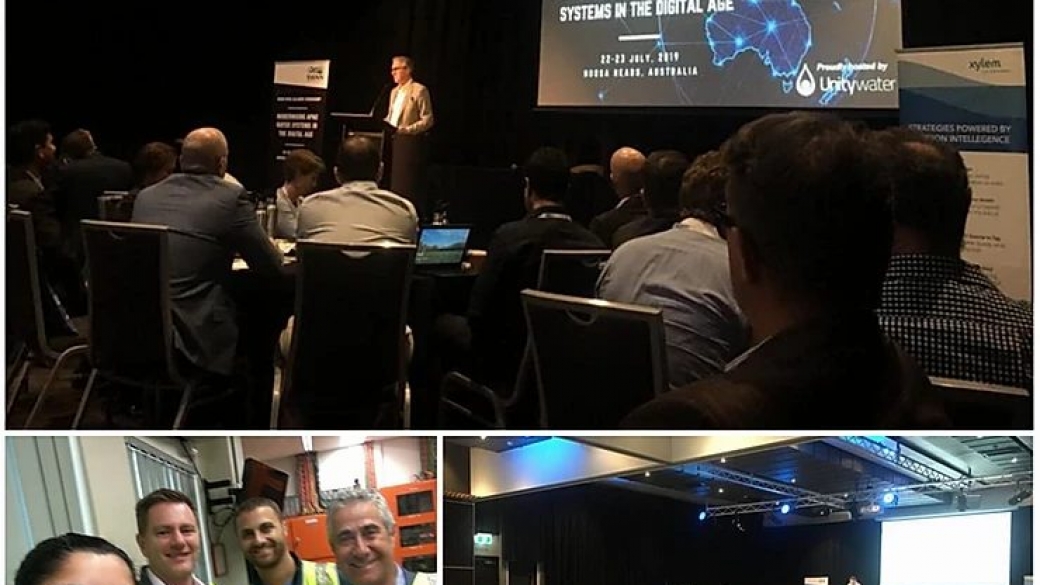 VAPAR was honoured to present at the very first SWAN Asia-Pacific conference in Noosa earlier this month. The conference objective was to accelerate the development of smart technology in the APAC region through SWAN partnerships.

The conference spanned two days, filled with informative sessions and round table discussions from water industry leaders from leading organisations in the region, as well as a site visit to Queensland Urban Utilities Eagle Farm Pump Station.

Special thanks to Unitywater for hosting the event and Queensland Urban Utilities for co-ordinating the informative site visit. 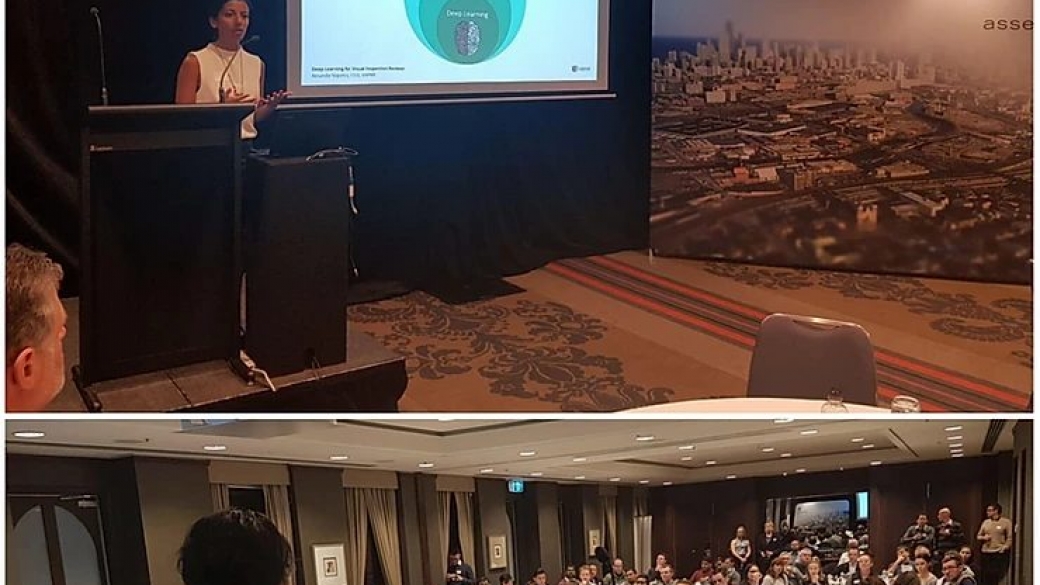 Thanks to everyone for the engagement, questions and feedback. Sharing knowledge is what creates the value of these forums, and we were excited to be a part of it!